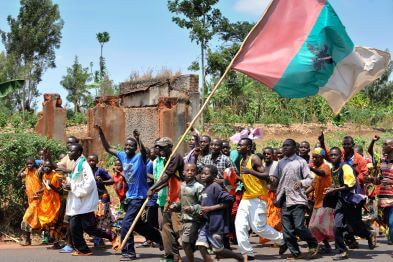 At first glance, this land just south of the equator seems a paradise far from more frenetic parts of the world.

It is here where Stanley succeeded in his search for Livingston, where Bogart piloted a heap called The African Queen, where baby hippos play in Lake Tanganyika in the setting sun.

But it is also here, where the green mountains rise up through clouds to the blue skies, that the tranquillity has been shattered with killings in the mist.

Since Oct. 21, when Melchior Ndadaye, Burundi’s first democratically elected president, was strangled and bayoneted in an attempted coup, the Red Cross says more than 200,000 people have been butchered in tribal warfare between the haves and have-nots – about twice the number of U.S. soldiers killed in Vietnam and Korea combined.

“This is killing with passion,” says Chris Giannou, 44, a Red Cross surgeon whose war stints include Lebanon, Afghanistan and Somalia. “You can’t get it any worse.”

But there are many more who can’t be counted, part of the ongoing toll downed by machetes, bamboo spears, bow and arrow. Only when these bodies float downstream does the result of the screams in the night become visible.

“You can’t even get to most of (the bodies) because they are somewhere far in the hills,” Giannou says.

In this vicious war, being lucky means surviving.

Pieoce Mijenahogoro and his friends heard the pounding of drums drifting through the hills – warning of imminent danger. But they heard too late.

As Mijenahogoro and 12 other Hutu tribe members started to flee, they were surrounded by Burundi soldiers of the rival Watusi tribe. What would happen next was never in doubt.

“The problem, you see, is we are just Hutu,” says Mijenahogoro, 30. “And that means we are dead.”

First came the gunfire, which hit all 13 men. Then came the pangas – machetes – to finish the job.

Twelve were killed. Only Mijenahogoro – lying facedown in a pool of his friends’ blood, pretending to be dead – survived. He hid in the mountains for almost seven weeks before coming to the hospital in the village here.

Giannou and others say this war – far from the consciousness of most Americans – is one of this century’s deadliest, leaving 90% of those attacked dead. In Bosnia-Herzegovina, Somalia and elsewhere, the kill rate is no more than 30%.

More than than 1 million have fled Burundi for neighboring nations. Another 300,000 are displaced within the country.

Twice before in Burundi’s history, the ruling Watusi – who make up 15% of 5.4 million population and are the landowners, merchants and educated elite – have slaughtered the Hutu, the 84% majority who primarily are farmers.

But this war is different.

President Ndadaye was a Hutu, elected with 60% of the vote in June’s election. He ran on a platform of land reform, return of thousands of exiled Hutu and allowing Hutu to serve in the military.

When he and six ministers were killed in the coup attempt, the Hutu went on the offensive.

They cut trees to block roads and destroyed bridges to thwart the army – then went after Watusi.

“They used traditional weapons, and they were effective,” says Dr. Tharcisse Ndayizeye, who runs a hospital in Gitega.

The coup crumbled after five days, when senior army officers – fearing outside intervention – withdrew support. That left a power vacuum, which remains.

Only then did the Watusi-dominated army head into the countryside, running through the rugos – mountain family compounds – to take revenge on the Hutu. Villages and fields were burned, bodies left to rot.

In one incident, 19 male college students were locked in a small house that was set afire. In the country’s few hospitals, many small children wear neck braces, necessary because soldiers stepped on their necks to hold them down.

“There is blood on everyone’s hands,” says Daniel Augsberger, head of the Red Cross mission here.

Now, two months later, it’s still not safe for any tribe member to venture into another’s territory. Even the 2% of the population that is the Twa tribe – one of the few remaining groups of African pygmies – has fervently staked out its own territory. Everywhere, people are afraid.

In the usually quiet capital of Bujumbura, nightly attacks continue in dark neighborhoods. The situation was so bad that President Ndadaye’s body could not be buried until Dec. 6 – 46 days after he was murdered.

No one knows what will happen next.

The U.S. government officially deplores the violence and calls for restoration of the elected government. On Dec. 9, President Clinton restored humanitarian aid after determining it would reach war victims. He also pledged continued U.S. support for U.N. mediation efforts.

The United Nations says Burundi needs at least $ 17 million in emergency relief; $ 4.9 million has been collected to date.

Other woes loom: Late rain delayed the fall planting. Then the war came – and 70% of the cattle was killed in fighting. Now, famine is projected for spring.

“We will have to beg food until June,” says Agriculture Minister Cyprien Ntaryamira.

The United Nations and the Organization of African Unity plan to send a commission to Burundi in early 1994 to help reorganize the government and attempt reconciliation.

They are not optimistic. Their bid to send 1,000 troops to help keep the peace – a move sought by Burundi Prime Minister Sylvie Kinigi – was quashed by Army Chief of Staff Jean Bikomagu. Kinigi, 40, has remained under the protection of the French embassy.

Peace in Burundi is crucial beyond its borders. In nearby Kenya, which has six major tribes, worried news commentators fear government preference for certain tribes will “create a Burundi here.” In neighboring Zaire, a collapsing economy is fueling tension between the six major tribes. In Liberia, a war has raged since 1990; in the Congo, one is brewing today; in Rwanda there is an uneasy peace.

The wrong spark could set half the continent on fire.

Now in Burundi, in the hospitals, the hills and the villages, there is one thing in common for all tribes: the bandaged bodies of the wounded, the bloated stomachs of the starving infants and the soft whimpers of those slowly dying.

“People are not ready to accept reconciliation,” says Francois Mbesherubusa, 49, a professor at the University of Burundi. “Ndadaye thought he would do it, but it was too early.”

Now it may be too late.

Civil wars Counting the dead is often difficult, but here are some estimated death tolls:

Africa’s troubled nations While the international spotlight has swept across South Africa’s effort to end apartheid and Somalia’s warring clans, Burundi is tearing itself apart. Tens of thousands have died in fighting and large chunks of the population have been uprooted. A look at Burundi and other trouble spots in Africa:

BURUNDI Population runs for safety About one in six of Burundi’s 5.7 million citizens are out of their homes as the fighting intensifies:

ALGERIA: More than 1,500 have died since radical Islamic Salvation Front – poised to win January 1992 elections – was banned and elections canceled. A Dec. 1 deadline for foreigners to leave was followed by slayings of several.

ANGOLA: Fighting resumed between UNITA rebels and the government after UNITA lost 1992 election. The first war lasted from 1975 to 1991. Round Two began in October 1992; 100,000 have died. New peace talks continuing.

CONGO: Rival ethnic groups have been battling since Dec. 10, with bodies floating in Congo River near Brazzaville. Tensions have risen since the parliament was dissolved in November 1992.

ETHIOPIA: Ethnic Oromos and Afars clans continue to battle in the 17th year of a civil war. Already one part of Ethiopa, Eritrea, has become independent. Hundreds of thousands killed in war

LIBERIA: War started in December 1989; rebel group split apart in July 1990. Dictator Samuel Doe was captured and slain in September 1990. Peace talks have continued on and off. Rebel group under Charles Taylor controls most of countryside; the other group, under Prince Johnson, the capital of Monrovia. More than 150,000 killed; 14,000 peacekeepers from six west African nations arrived on Aug. 25, 1990.

MOZAMBIQUE: Sporadic fighting between Renamo rebel group and Frelimo ruling party is in 16th year. At least 1 million have died.

NIGERIA: Military voided the results of the June 12 presidential election, triggering violent street protests. New elections have been promised for 1994.

RWANDA: The U.N. sent in 2,800 peacekeepers in October 1993 to police a ceasefire between Hutu and Watusi; they had been fighting since October 1990.. Hundreds killed.

SUDAN: North-south civil war continues into its 10th year along fundamentalist Islam/Christian lines. More than 500,000 have been killed. Humanitarian experts predicts the biggest hunger disaster in Africa, dwarfing that of Somalia and Ethiopia.